Congratulations to our cycling heroes for completing four days of cycling on their Tour de SE challenge for Maggie's raising an incredible £7k!

Colleagues from across the business came together last week to complete four days of cycling and raise funds for Maggie’s.

Their challenge was to depart from London each day to Brighton, Oxford, Cambridge and Southampton, a total 290 miles.

Huge thanks to our 17 riders who took part and six strong support crew who drove the vans, sorted refreshment stops with home baked goods and more.

Special mention also to our sponsors, CAD 21 Ltd, J Coffey and Alloy Fabweld who made a generous donation to support our fundraising efforts for Maggie’s.

Here’s how they got on.. 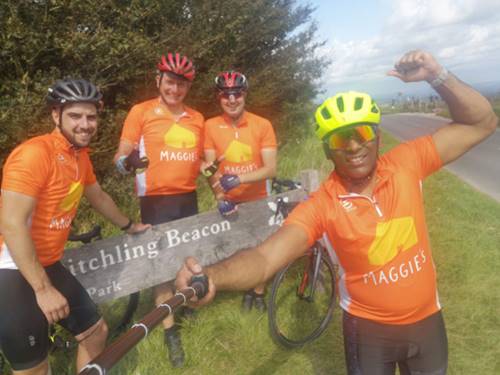 The 12 strong team rode together through the bustling London traffic before making their first stop of the day: Maggie’s Royal Marsden. As it was Sunday, the centre was closed, but they took time to admire the striking red cladded building that was constructed by Sir Robert McAlpine. They took a few photos before heading back on the road with some lemon drizzle cake.

A couple of hours in and onto the biggest challenge of the day, Ditchling Beacon. It was a hotly contested race to the summit. From there it was a downhill descent into Brighton where the team celebrated with a few refreshments before their return into London. 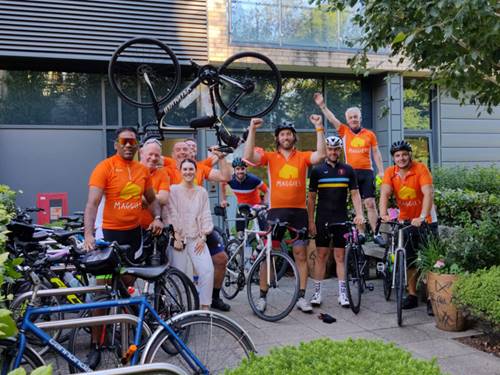 Day 2 began with some warmups and several wrong turnings on their way out of London. But they made it in one piece to the first photo opportunity of the day: The Olympic Stadium at Queen Elizabeth Park. This was the only stop of the day which didn't involve punctures!

One rider must have shares in inner tubes as he did his best at clearing out the entire stock in Hertfordshire. In total, the group suffered 5 punctures throughout the day, a new record! After obliterating the rest of the lemon drizzle cake, the team set off on what they thought were the last 20 miles of the day's ride.

37 miles later they arrived at Maggie’s Cambridge and were met by Centre Manager, Andrea, who showed everyone around the temporary building, enthusing over her run through of the stunning new centre planned to be built between the medical campus and the hospital.

She explained the difficulties associated with gaining approvals for the new centres and that every donation received really makes a difference to making these a reality and therefore positively impacting people's lives. It was interesting to find out how the NHS are now subcontracting some cancer care counselling to Maggie’s which reinforces just how vital their work is. 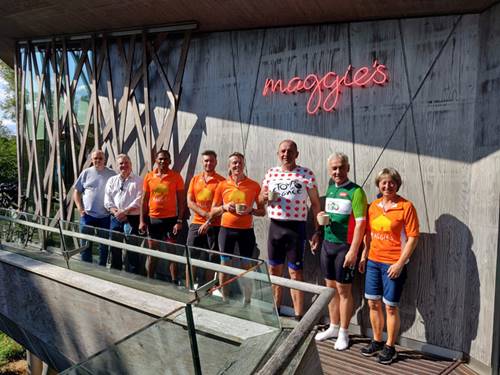 Day 3, and just five riders. Still the group were in good spirits as they departed central London once more and headed for the destination of the day: Maggie’s Oxford. One rider overslept and arrived late having had no breakfast or Garmin. Needless to say, the group sorted him out with flapjacks and a breakfast stop after 15 miles.  The route took them through St James and Hyde Park, before joining the Grand Union Canal and an easy ride out to Wembley.

Once outside of the M25, they entered the quiet villages of Buckinghamshire taking on some steady hill climbing. They crossed the Chilterns, using the Chilterns Cycleway, before dropping down into Oxford and the Maggie’s.

They were greeted by Centre Manager, Caroline, who is also a keen cyclist and expressed interest in joining the ride next year! The group enjoyed welcome refreshments and a quick tour before heading back to London. 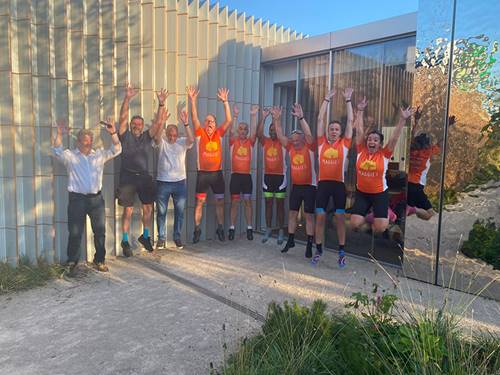 Our team of riders met promptly at 8.30am in central London for the final day. With time against them, they had fewer stops planned and their fingers crossed for little or no mechanical stops. The group divided early at Richmond Park and it was a steady slog to a sun-drenched lunch stop in Farnham. After some much-needed carb loading, they followed their route taking them across to Alton, entering the Meon Valley and all the way down to the south coast at Wickham.

A short push from there took them through to Southampton and one last hill climb up to Maggie’s Southampton. The group of riders literally jumped for joy to celebrate their efforts after a cuppa and a chunk of Colin the caterpillar cake.

Congratulations to everyone involved. The money raised is used to make the biggest possible difference to the people living with cancer, who need Maggie's now more than ever. To show your support you can do so by following the link below:

Our fundraising for Maggie's

Our projects for Maggie's