Hockley Mills tops out in Birmingham

The construction of the Hockley Mills site at 33 Pitsford Street, Birmingham has reached a key milestone.

The Hockley Mills site at 33 Pitsford Street, a major build to rent (BTR) development in the heart of Birmingham’s Jewellery Quarter, celebrated a significant milestone with a traditional topping out ceremony earlier this month. 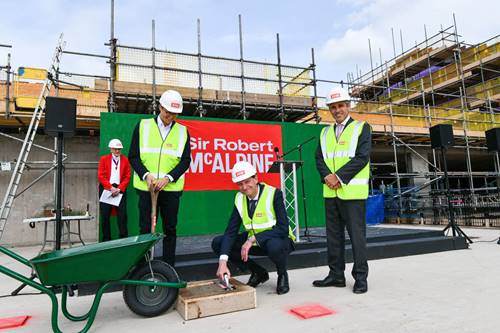 In keeping with the Scottish roots of the contractor, Sir Robert McAlpine, a piper led the guests to the rooftop level of the building, where the traditional pouring of concrete took place and an evergreen bough was nailed to the structure, a tradition which dates back to Roman times to protect buildings from evil spirits. This was followed by an exchange of the ceremonial tankard “for a job well done.”

Upon completion in 2023, the scheme will be named Goodsyard and provide 395 one, two and three bedroom apartments alongside a new entrance to the Jewellery Quarter train station, 116 car parking spaces and 28,000 sq ft of flexible commercial space for retail, leisure and offices.

The project team recently invited grassroots and charity organisations situated near the site to bid for a share of a £10,000 grant. After a careful selection process, the funds were awarded to three projects promoting inclusion and providing support to the local communities, encouraging the creation of social value in the area.

“It is always important to pause and recognise success, and the topping out of Goodsyard gives us the opportunity to do just that; congratulating the whole team on reaching this milestone, whilst also acknowledging the positive impact the development will have on the local neighbourhood. This is our second Build to Rent project in Birmingham, and shows our continued commitment to the City and the sector.”

This milestone is a perfect opportunity to celebrate our collaboration with Legal & General, which makes it possible to bring this exciting BTR development to Birmingham’s Jewellery Quarter and create social value for the local communities.

“This topping out ceremony celebrates the great collaboration and technical excellence demonstrated by the development and construction teams. We are very proud of what has been achieved so far. We look forward to continuing our work with Legal & General to deliver this landmark development and boost the Jewellery Quarter area with contemporary, high quality accommodations and commercial facilities.”