We are pleased to announce that we have successfully raised £56,000 for ParalympicsGB, following a charity event hosted to support athletes on the road to the Paris 2024 Paralympic Games. 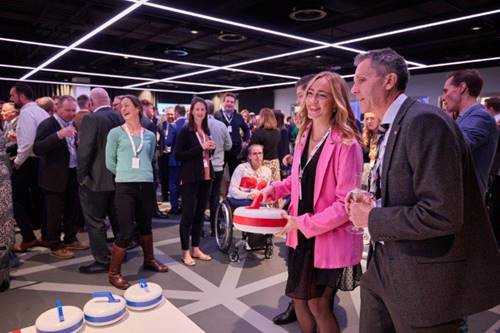 Marking ten years from the London 2012 Paralympic Games, the event was a celebration of the team’s successes during Tokyo 2020 and Beijing 2022 Paralympic Games, which helped spark a step change in how disability is perceived in the UK.

Guests were able to try out Paralympic sports and bid on a range of sought-after prizes during a silent auction, including a one-to-one velodrome cycling session with a Paralympic athlete.

Earlier this summer, Sir Robert McAlpine organised a sponsored Abseil from the ArcelorMittal Orbit for ParalympicsGB.

The money raised will be used to support the ParalympicsGB team as they prepare for the next Paralympic Games.

Sir Robert McAlpine began its partnership with ParalympicsGB in 2019 and has committed to continuing its support for the British Paralympic Association, the UK’s largest national disability sport charity, until the Paris 2024 Games. The British Paralympic Association is responsible for selecting and funding ParalympicsGB athletes for the Summer and Winter Games and harness the power of their outstanding performances to challenge perceptions of disability in society, helping to inspire a better world for disabled people.

Donations can be made to ParalympicsGB via their website.

I’m really proud of our partnership with ParalympicsGB because it aligns with our inclusive values, our family culture and our tireless pursuit of excellence. It is wonderful to see so many people from our industry coming together to celebrate the achievements of our Paralympic athletes, who have done so much to transform attitudes around disability. I want to say a special thank you to all our event supporters and those who dedicated their time and money to this incredible cause.

Guests at the Best of British lunch try out Paralympic sports.

10 years since the London 2012 Paralympics

Seven-time Paralympic champion, Hannah Cockroft, shares her memories of the London 2012 Paralympic Games with guests at the Best of British lunch.

Mike Sharrock, CEO of the British Paralympic Association, closes the Best of British lunch by sharing insights into the achievements of the ParalympicsGB athletes and the road ahead to the Paris 2024 Paralympic Games.

Thank you to our event supporters

Our Best of British lunch was made possible by our event supporters. Thank you to: Briggs & Forrester, Morson, Bryson, GAP Group, The CIOB, and Capital Reinforcing.

Our partnership with ParalympicsGB