One Centenary Way tops out at Paradise Birmingham

The construction of One Centenary Way at Paradise Birmingham has reached a key milestone.

One Centenary Way, a major new landmark commercial building in the heart of Birmingham and a new gateway to the city’s rapidly expanding commercial core, marked another major milestone last week after it was officially topped out. 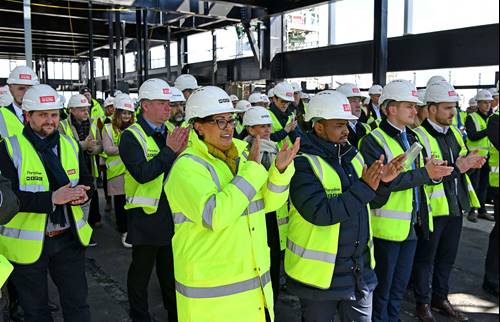 A traditional ‘Topping Out’ event was held on the thirteenth floor of the building, part of the city’s £1.2 billion Paradise development, organised by the development and construction teams, MEPC and Sir Robert McAlpine.

The steel exoskeleton also enables the building to straddle the A38 Queensway tunnel, that runs directly beneath the site and has remained open throughout the construction period, without coming into any contact with it.

Designed by Glenn Howells Architects, with engineering input from Arup, One Centenary Way is a 68 metre tall, 13 storey, 280,000 sq ft commercial building with office, leisure, bar and restaurant uses on the ground floor. 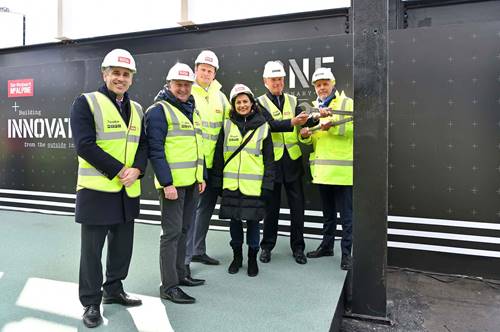 The basement of the building features Birmingham’s first dedicated cycle hub with space for up to 400 bikes, showers, storage and maintenance facilities, all available to the public as well as Paradise occupiers.

The building is also highly sustainable due to a pure electric heating and hot water supply system and SMART access to services, information and facilities.

Featuring floorplates of up to 22,500 square feet and with a stunning terrace overlooking Centenary Square on the twelfth floor, the building is a significant new landmark for the city and will make a positive statement on the city’s skyline.

There has already been significant commercial interest in the building, and its first major office letting was announced last year when global employee-owned built environment consultancy Arup took 68,000 sq ft of space across three floors. Arup will be relocating its Midlands office and 1,000 staff to the building in 2023.

Chris Taylor, Chairman of MEPC and CEO of Real Estate at the international business of Federated Hermes, said: "Today is a celebration of the huge efforts and extraordinary collaboration by the development and construction teams to bring One Centenary Way to life.  By investing in a building that sets new standards of sustainability, efficiency and desirability for the city, we are supporting Birmingham’s credentials as a leading business destination.

"An exemplary building like One Centenary Way sets the standard for future development in the city centre and is a space that’s already contributing to regional growth, attracting jobs, skills and investment into the centre of the city for the benefit of local people."

Rob Groves, regional development director with Paradise development manager MEPC, said: "One Centenary Way is a major new commercial building for Birmingham and underlines everything that Paradise is about: creating new connections, spaces and places, jobs and opportunities for the people of Birmingham and the region.

"Our third building marks a specialist, engineering-led design ethos with exemplary sustainability credentials, including the city’s first cycle hub. One Centenary Way is a building that earns its place on the landscape."

Some buildings are exciting from the get-go, and this has definitely been the case with One Centenary Way. From the first piling activity to the huge structural foundations required which included the largest trusses ever seen for a commercial building in Birmingham, we’ve been passionate about this building from day one. But today is all about marking the completion of structural work and celebrating the collective efforts to get to this point. Internal work will continue for some months, with occupier fit outs commencing later in the year, all contributing to the impact Paradise Birmingham is having on the city and its people.

Cllr Ian Ward, leader of Birmingham City Council, said: "Thanks to the hard work of a lot of people, and many different teams working across both the private and public sectors, we are beginning to feel the very real benefits and economic uplift of projects like Paradise.

"Watching One Centenary Way rise from the ground up has been of interest to a lot of people and I think we can all agree today on how impressive this major new landmark for the city looks. But it’s not just a building in place for its own sake, it is creating and sustaining new jobs for the people of Birmingham, new skills and opportunities for all, and a landmark we can all be positive about."

Paradise sits in the country’s largest city centre Enterprise Zone and has already benefited from investment by the GBSLEP in enabling and infrastructure works.

A website showcasing the vision for Paradise, in addition to a live time-lapse camera and all the latest news about the development, can be viewed at www.paradisebirmingham.co.uk