As a business that prides itself on its family ethos, we are delighted to see colleagues making use of our gender-neutral parental leave policy.

Site Foreman David Twizell made quite the impression on social media recently, when he shared his heartfelt gratitude for the fact that, thanks to our gender-neutral parental leave policy, he gets to enjoy six months paid leave to spend with new addition Ruben.

The response on LinkedIn was phenomenal, with around 9,000 views and more than 250 people taking the time to comment, wish him well and share their own experiences.

As a family-owned business we are proud of our inclusive policies which put family first.

It was that family focus that has been part of the attraction for David since he joined us 15 years ago, as a 19-year-old general labourer, hoping to complete his apprenticeship and gain as wide an experience as possible in construction. 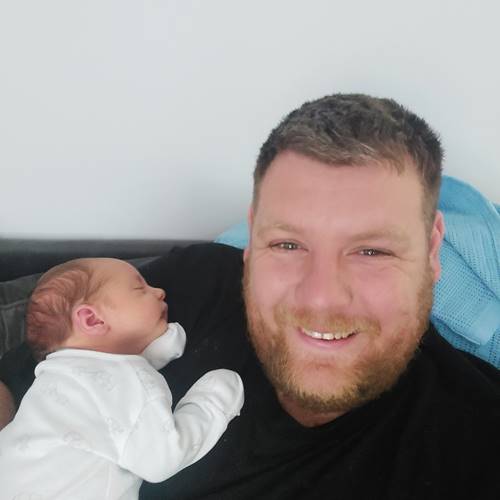 “I always saw my work as something more. Even from the earlier days of being on the tools, Sir Robert McAlpine had a family like feel, with so many family members and previous generations within the company, it felt like being part of one large family”.

As his experience grew with each new project and challenge, David moved on to the role of Works Manager, gaining multiple qualifications along the way.

Standout projects for him include Eldon Square and Metro Centre in Newcastle, which he remembers as being extremely difficult logistically and buildability wise.

Working in shift patterns, the team self-delivered a lot of the elements, the banter and extra effort from the team making those days incredibly special.

He takes great pride in the various projects he’s worked on during his career, even if it does get lost on family and friends on occasions, including his two girls, aged six and 11.

“I think my daughters could point out every project I have worked on,” he says. “Although I try to remind them each time, it’s normally received with “we know Dad”.

David is grateful that Sir Robert McAlpine has allowed him to mould his own career, something he sees reflected in the way new joiners today are supported and given room to grow.

“It’s rare to find an organisation which offers the family values and benefits that the business does,” says David who is proud to work for a company that, as he says, “has delivered some fantastic and challenging projects and will remain part of Britain’s history long after we are gone”.