20 years after Sir Robert McAlpine built Eden Project Cornwall, we are thrilled to revive our collaboration with Grimshaw and Eden Project to build their Pavilion at the COP26 Summit.

We are proud to partner with Grimshaw and Eden Project to deliver the Eden Project Pavilion at the 2021 COP26 Summit, in Glasgow. 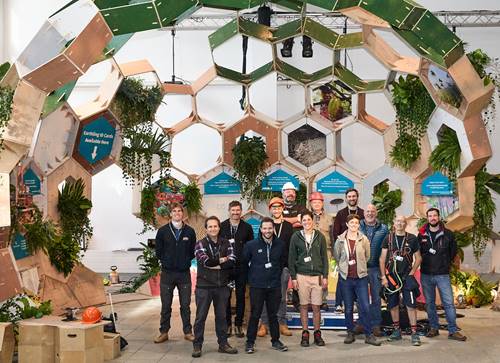 Located in the Blue Zone in the Scottish Exhibition Campus, the Eden Project Pavilion is a showcase of, and call to arms for, the actions needed to regenerate our fractured planet. The structure stands at 6.5 metres high and measures 8 metres in diameter at its widest point.

It harnesses the geodesic design reminiscent of the Eden Project biomes in Cornwall in the UK, designed by Grimshaw but, this time, its collapsed panels reflect the planetary crisis we have entered.

Sir Robert McAlpine Project Directors, Mike Rider and John Cole oversaw the construction of the Pavilion, with a team of joiners based at our plant yard in Coatbridge, near Glasgow.

Three weeks before the event, the team worked off site to construct and assemble the individual cells that form the structure. They used approx. 200 sheets of reclaimed plywood sheets from site hoardings. The dome was then dismantled to be rebuilt in the exhibition centre in Glasgow, in just under four marathon days.

Regional Plant Manager John Gallagher and Office Manager Tracy Brown also based at Coatbridge, played an instrumental role here with the logistics. They managed the storage of the structure and projectors, watered the plants and arranged safe transportation.

At COP26 the Eden Project Pavilion houses a ‘cabinet of climate curiosities’ – objects that represent the urgent transformations required, which in turn have nurtured an ecosystem within the dome: plants climb up and in through the cracks as biodiversity once more returns. The Pavilion creates a narrative of hope and positive change, recognising the potential we have to heal our broken planet. 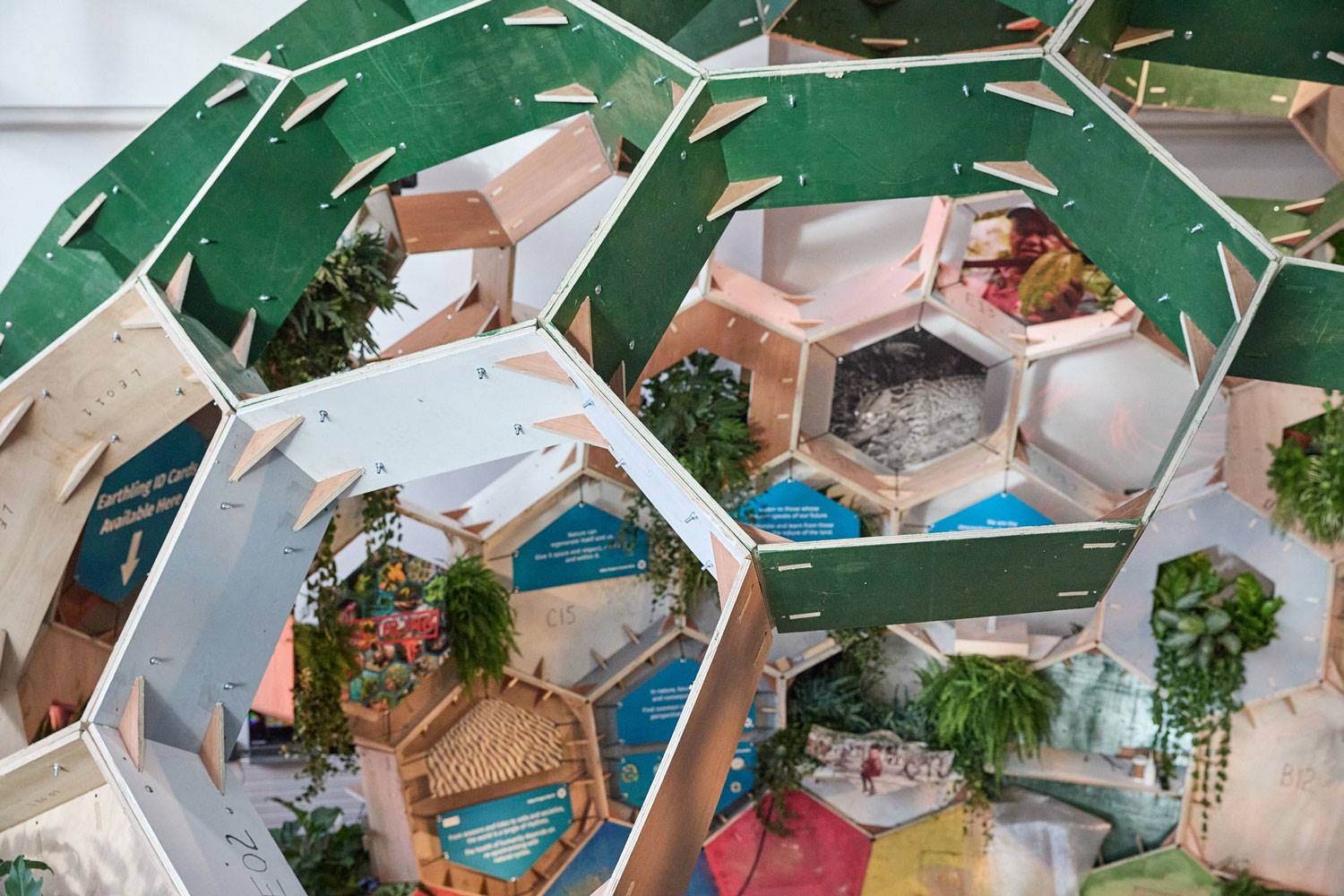 The structure, designed by Grimshaw, adapting and developing the original concept,  uses only materials that have been grown, reused or recycled. While visually creating a metaphor for the planetary emergency, its design is inspired by nature: minimum materials for maximum strength, with the reused plywood structure supporting the abundant planting and exhibit elements.

The recycled and reused materials have been sourced from local construction sites and from the stage used for the outdoor Eden Sessions concerts in Cornwall.

The curios are a diverse collection of objects, artworks, media, models and installations; each represents a perspective, value, or insight that is part of Eden’s philosophical ecology, while also being a gateway into a specific Eden affiliated project: from automata that speak to our interconnectedness with the natural world; to augmented reality and planet positive artworks; to immersive media that reveals the invisible worlds around us; or geothermal drill bits and solar energy trees that speak of an end to fossil fuels.

The Pavilion also asks us to consider our connections and shared responsibilities: not as delegates of nation-states, but as Earthlings wholly dependent on the health of the one planet in the universe we know to be suitable to life.

This forms the context to the Pavilion being a stage to convene, relax and recharge during a fortnight critical to the health of all life on Earth.

The design, construction and delivery of the Pavilion at COP26 brings together the original team behind the design and delivery of Eden Project Cornwall: Eden Project, Grimshaw and Sir Robert McAlpine, which after 20 years of operation has attracted 22 million visitors, creating a £2.2bn impact on the local economy.

Construction has an active role to play in the collaboration for climate action. 20 years after Sir Robert McAlpine constructed the iconic biomes at Eden Project Cornwall, we are proud to be working again alongside Grimshaw on the Eden Project Pavilion at COP26, which sends a powerful message, to global leaders and individuals alike, on the actions we need to take collectively to address the climate emergency. 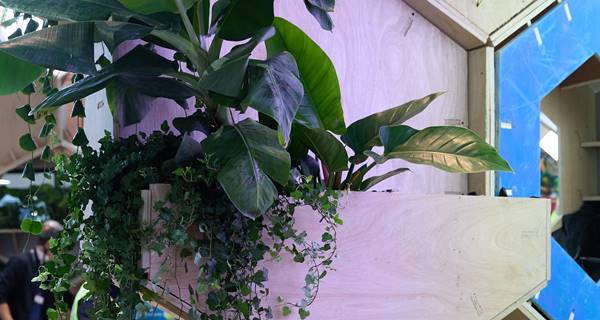 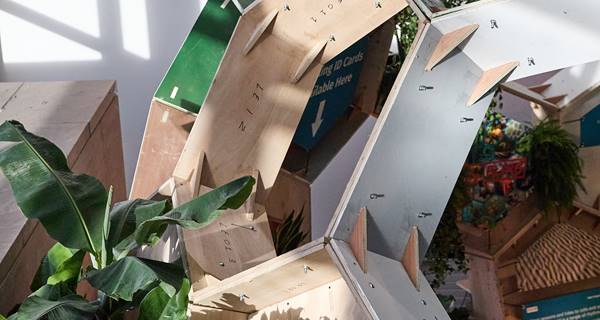 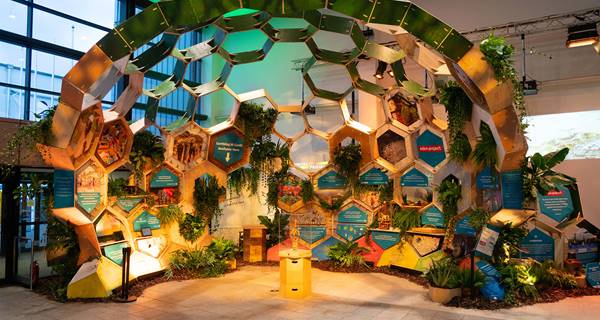 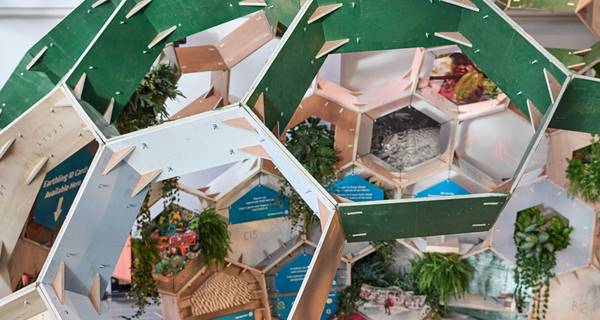 Our commitment to sustainable construction