Teamwork, technical expertise and community engagement were key in the design and construction of this 15-storey commercial office building and iconic roof top garden in the heart of the City of London

Fen Court is an icon for high-standard architecture, with its roof top garden, glazed “crown” and a striking award-winning design. Constructed on a restricted site in the heart of the City of London, public safety, stakeholder engagement and sustainability were paramount to the successful construction of this 15-storey commercial office development.

Fen Court is a high-quality, 15-storey commercial office landmark in the City of London. The scope of works included the design and build of 40,000m2 of shell and core offices, including a four-storey basement, ground floor retail spaces and London’s first publicly accessible roof top garden.

The building’s striking design saw it named winner of the Office, Future Projects Award at the 2012 World Architecture Festival, and commended at the Structural Steel Design Awards in 2019. The geotechnical collaboration between our in-house McAlpine Design Group (MDG) and our construction partners saw the project win UK Project of the Year at the Ground Engineering Awards 2017. It was also a finalist in the Project of the Decade category at the Ground Engineering Awards in 2018. In 2019 the project was shortlisted for Environment & Sustainability Initiative of the Year at the Construction News Awards.

The building benefits from sustainability features such as a Closed Cavity Façade (CCF) and extensive solar shading and high-performance glazing throughout. But perhaps the most remarkable element is the sharp geometries of the building’s façade. The outer dichroic glass panels on floors 10-14 have a distinctive crown shape and reflect sunlight in a host of different colours onto the streets below. This provides a constantly changing crystalline appearance to the upper floors is that determined by light and weather conditions. 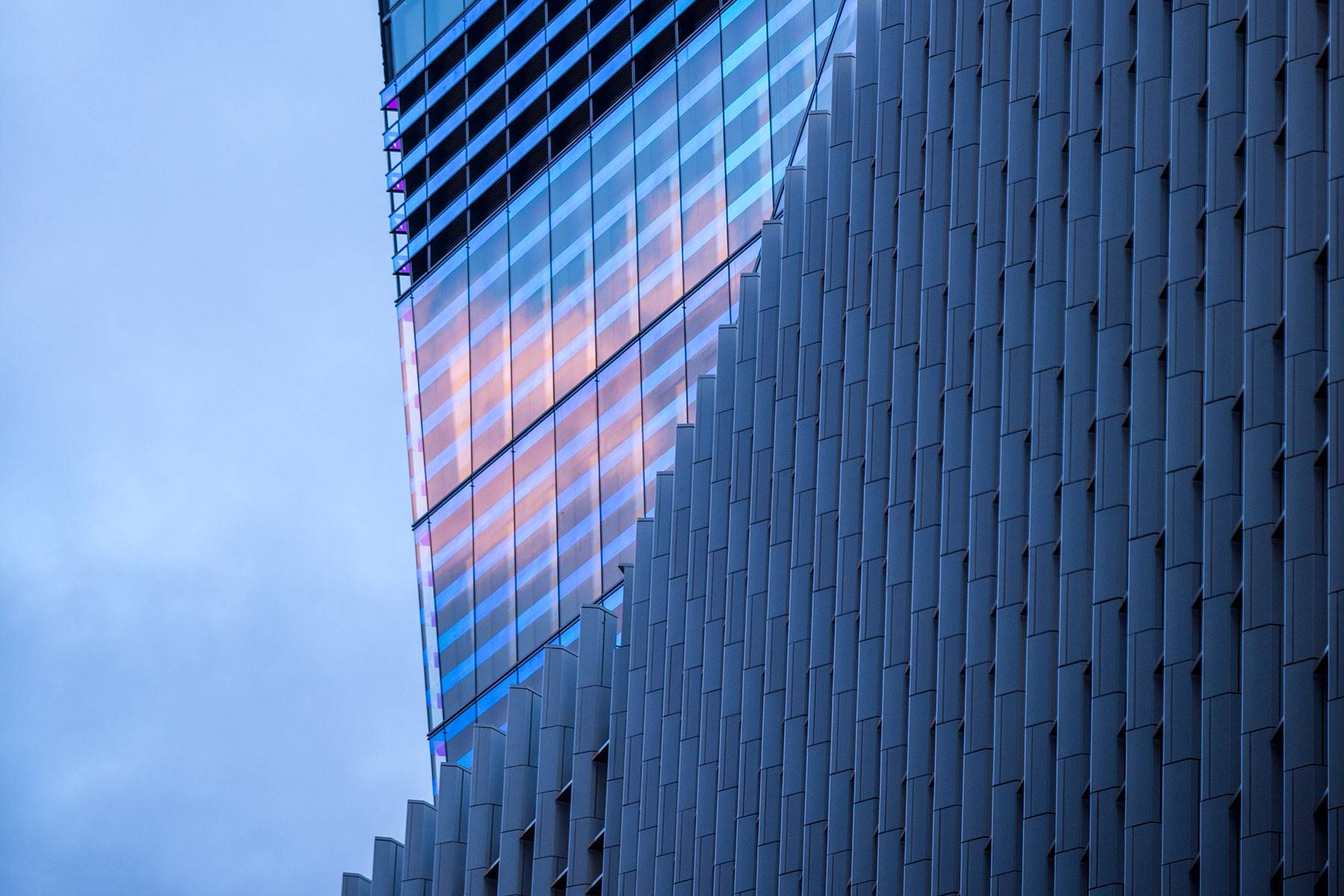 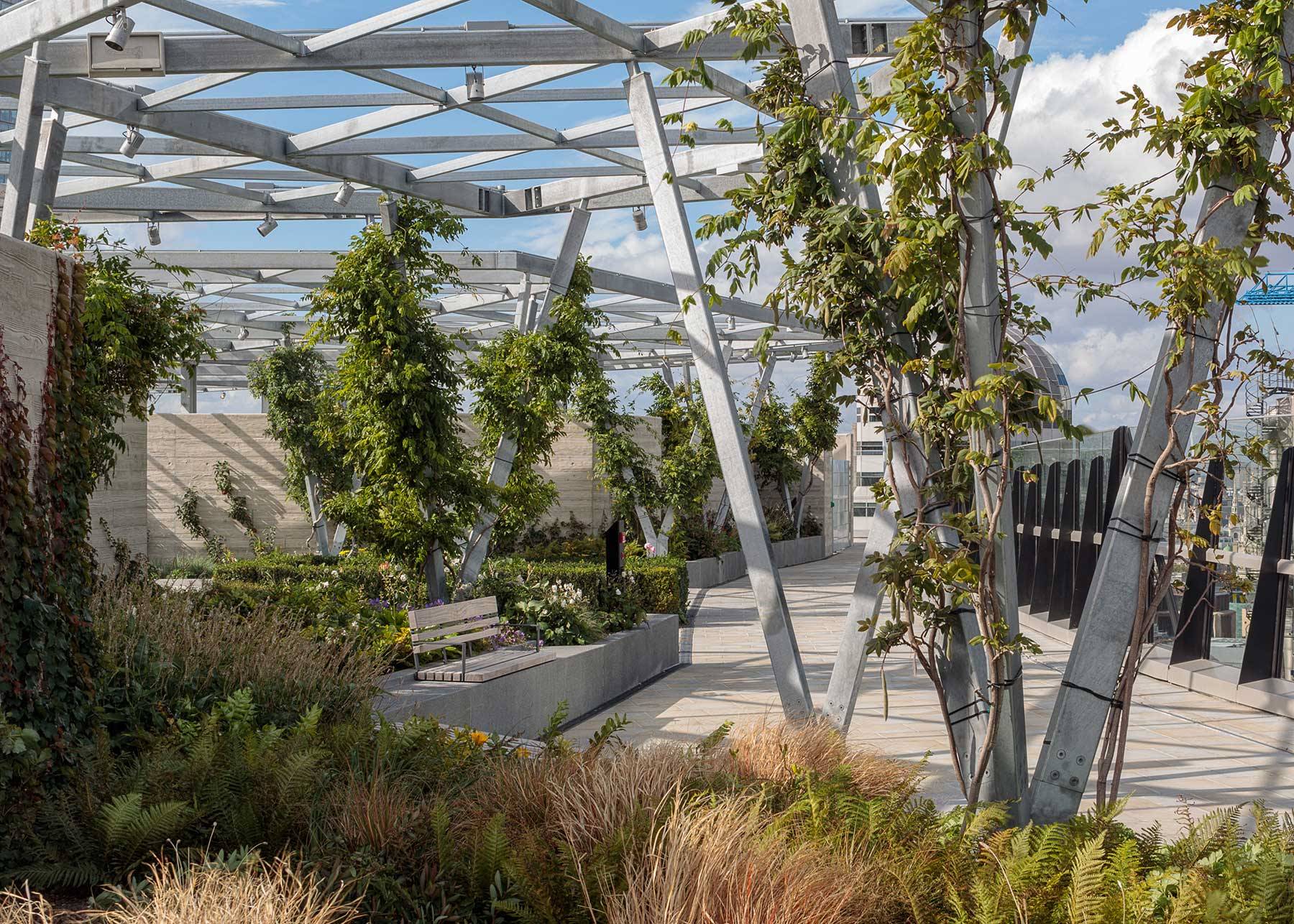 The restaurant and garden terrace are fundamental to the identity of the building and enrich the working space of this development. It is the first roof top garden in the City of London that is fully accessible to the public. Fen Court creates a new category of public space, enabling visitors to enjoy a garden atmosphere with 360-degree views of London’s square mile.

The garden boasts over 3,000 plants, consisting of perennials, shrubs, climbers, fruit trees and around 80 wisteria trees, planted to climb and cover a pergola covering over 30% of the roof. The garden also features a number of bird boxes installed high on the pergola in an easterly aspect to encourage the nesting of swifts which have been sighted in the area. The garden enabled the project to achieve a net biodiversity increase of 8.99 species (normalised by area) post development.

By adopting a collaborative approach to permanent and temporary works design, our in-house McAlpine Design Group (MDG) and our construction partners were able to value engineer the design of the building’s four-level basement. The team developed a temporary support solution which substantially reduced the construction programme for the basement.

The team also developed a piled raft foundation in place of a fully piled solution and reduced pile diameters in some areas to add further efficiencies to the construction process.

As a result of collaborating with our construction partners, the project was a finalist for Project of the Decade at the Ground Engineering Awards in 2018. 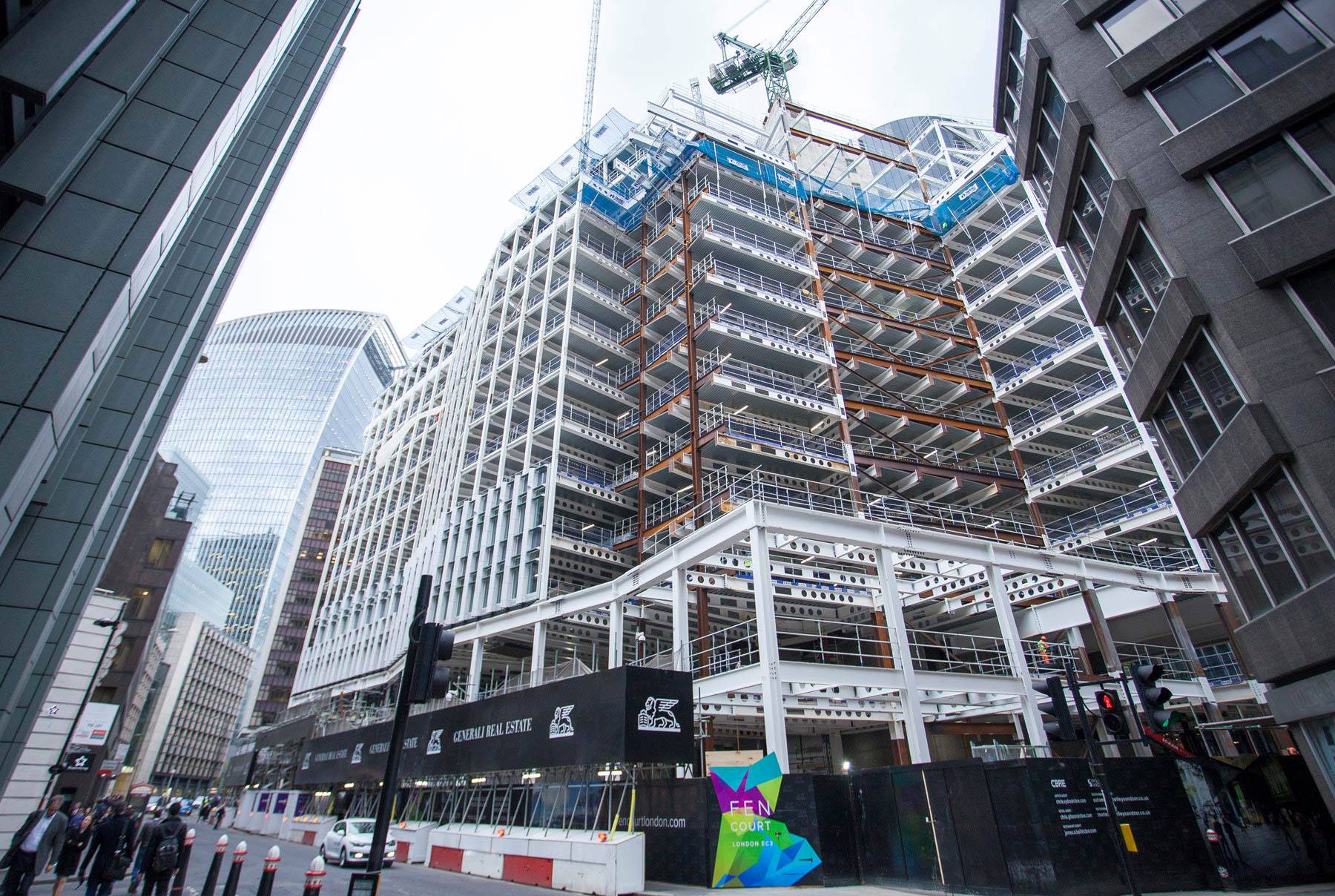 On site, the value engineered design, by MDG and our construction partners, controlled ground movement of the upper levels of the four-storey basement during excavation. Additionally, potential risks caused by site congestion were reduced by a simplified fabrication and installation design.

The site was surrounded on three sides by roads and pavements, with a pedestrian footpath on the fourth. Fenchurch Avenue itself is narrow and to ensure public safety around the site, we used mass gravity barriers on the pavement opposite the site to separate pedestrians from the traffic and discourage them from crossing or entering the live carriageway.

One of the key requirements of this project involved the relocation of a high street bank which remained operational throughout the works. This presented the primary challenge to both the budget and programme. Keeping the existing NatWest branch in place meant the eastern corner of the site could not be cleared or excavated until the new facility was ready. This resulted in the foundations and steelwork in this section needing to be delivered separately from the rest of the project.

To help mitigate this delay, the walls of the new branch were pre-cast off site. In addition to easing the programme, this pre-fabrication technique helped reduce the level of disruption on site and was repeated later in the build for the closed cavity façade.

Planning and managing a build where construction took place alongside demolition, and excavation alongside construction, was no small feat, and our programme allowed NatWest to maintain a seamless operation across both old and new premises.

We also worked closely with the bank’s team to minimise any impact on its day-to-day operations. 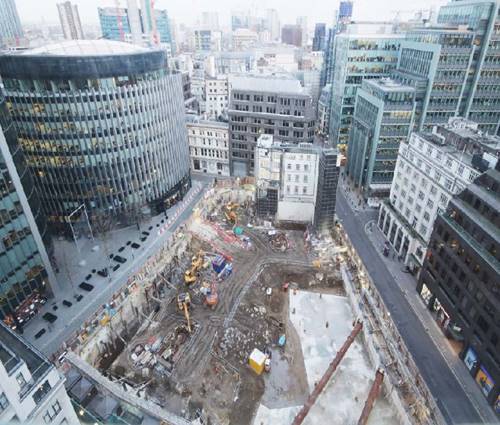 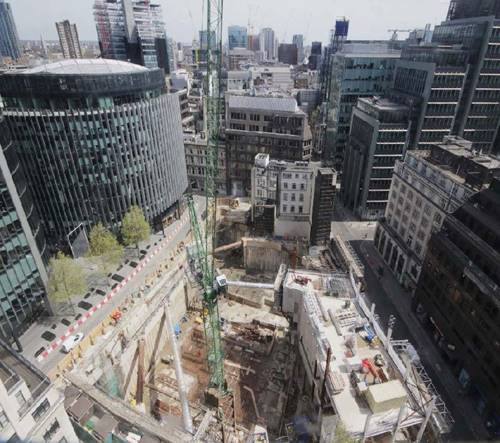 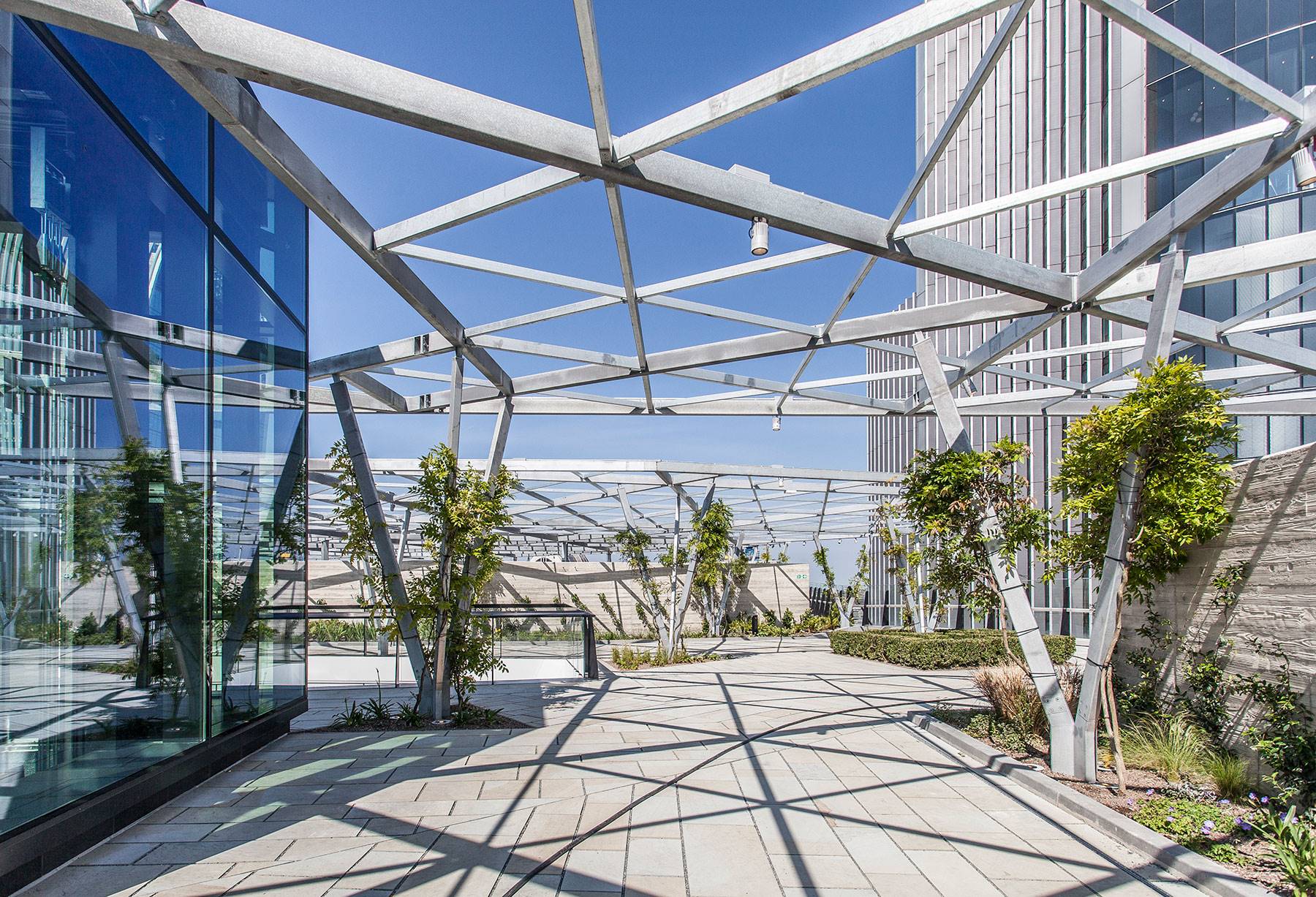 During construction we saved 18t of CO2 by using a voltage optimisation unit to reduce the amount of energy we used. Further energy saving initiatives included the use of LED temporary site lighting. The site also adopted a minimal discharge commissioning process saving 1.5 million litres of water and was waste neutral, using more recycled content than waste produced. We also focused on bringing the building’s original BREEAM Excellent rating based on 2011 requirements up to the 2014 requirements at no extra cost to the client, while keeping to the same programme.

In the local area, nearly £60 million was invested in SMEs and 62% of the projects labour lived within a 20 mile radius. We hired 12 apprentices and offered 12 work experience placements to candidates who also lived within 20 miles radius. We also gave more than 60 school, college and university students the chance to visit site to gain experience.

The project was shortlisted for Environment & Sustainability Initiative of the Year at the Construction News Awards in 2019.

Our services and expertise

View all services and expertise