As the Royal Albert Hall pauses construction for its 150-year anniversary in 2021, it seems appropriate to reflect on a remarkable programme of works undertaken on this compact but highly visible site.

Just before Christmas 2020, six weeks ahead of schedule despite Covid-19, our Special Projects team at the Royal Albert Hall completed the restoration of its famous façade, bringing to a close multiple phases of work and 8 years of operations.

As the Hall pauses construction for its 150-year anniversary in 2021, it seems appropriate to reflect on a remarkable programme of works undertaken on this compact but highly visible site, ranging from significant invasive works and the integration of new MEP services to the artisanal restoration of historic decorative detailing. 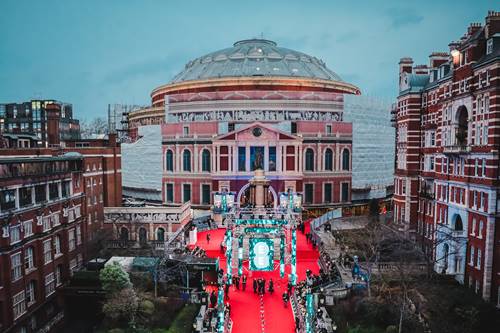 Most remarkable of all, the Hall’s daily operations were maintained throughout and, of around 400 events in the auditorium (including the BAFTAs and the BBC Proms) and over a thousand events a year in other spaces, not a single performance was missed.

Starting with a consultation and investigative works in December 2012 that improved upon the Hall’s original methodology and programme, Phase 1 began in January 2014, with the intricate replacement of the Hall’s Victorian steam-powered heating system with a Low Temperature Hot water (LTHW) system. A temporary plate heat exchanger was inserted, awaiting the new plant room to be built in Phase 3, and the existing cooling system was extended. These works involved thorough cleaning of retained parts and the removal of significant levels of asbestos throughout the Grade I listed building, while observing the Hall’s requirements that staff and visitors should be unaware of the works throughout the programme.

In 2016, Phase 2 was envisaged as enabling works for the basement build to come, but the temporary works extended to complex underpinning for an existing and a new lift shaft, as well as extensive structural remodelling to ensure good circulation between the Hall and the future basement and the construction of new internal staircases. These works also saw the relocation of outside broadcasting infrastructure, further heating and cooling works, upgrades to the Building Management Systems, and repairs to fibrous plaster ceilings.

Known as “the Great Excavation,” Phase 3 was at the heart of the Hall’s programme of renewal, providing two levels of basement (40m by 20m, by 10m deep) to the South-West. With breakthroughs into the Hall through its 1.4m thick outer walls, digging an 11m lift shaft and carrying out pipe-jacking for a new sewer connection within a very confined area, all adjacent to a listed Victorian chimney that required constant monitoring, this was anything but a standard dig. The original solution for forming new structural openings – using steel portal frames introduced sequentially – was found to be unfeasible. Working with the McAlpine Design Group and our sub-contractor Realtime, the team developed an alternative that required minimal temporary works.

Brickwork was cored out to allow heavily-reinforced metre-wide C-shaped underpins to be formed either side of the 2.2m wide openings, joined by reinforcement connectors and beams cast in place. This alternative solution provided the required openings without risk to the listed buildings. Making the best use of the space created by the excavation was naturally critical, and the decision to switch from secant to sheet piles freed up a lot. Challenging the Hall’s original plans for its new service lift saved the client further floor space, and time; our alternative solution took advantage of the planned refurbishment of their existing service lift, simply extending the shaft down to the new areas by excavating a void beneath the Hall, backfilled during its construction in 1871.

The Great Excavation was recognised at the Ground Engineering Awards 2020, winning the category for a UK Project valued between £1m – £3m. But Phase 3 went beyond even this major civil engineering scheme, also entailing the diversion of existing services, new changing rooms and toilets, the complete redesign and upgrade of the building’s antiquated MEP systems and the installation of an outstanding modern plant room, as well as the final phase of upgrades to the heating and refrigerant elements. Externally, the works included the refashioning of the South-West Porch, complete with four sets of doors and bronze work matched to that elsewhere on the circumference. This focus on blending the new in with the old was a clear stipulation of the client, extending to internal works too, where the restoration and repair of existing ornate plasterwork and general redecoration were toned to fit into the appearance of adjoining areas.

Externally, Phase 4 was the most visible of the programme, as the team embarked on the restoration of the entire 149-year-old Grade I listed façade, though a stunning trompe l’oeil on the scaffold’s Monarflex gave casual observers the impression of business as usual. The team adopted a sympathetic approach to the façade repair, preventing undue damage and protecting the fabric for the long term. Under an ethos of consolidation rather than restoration, they used light-touch methods and only replaced when necessary; where replacement was the only option, the team managed all elements, from off-site manufacture in Leicestershire to installation by skilled masons on-site and sign-off by the client and architects. In addition to re-fixing and replacing the terracotta blocks, brickwork, stone and mosaic that make up the façade, our team carefully repaired the roof leadwork, replaced cast iron rainwater downpipes, repaired the Smoking Gallery balcony and redecorated all the external windows, doors, metalwork and the existing canopy structure.

This final phase allowed our Project Manager to mentor a graduate on a Site Management apprenticeship, with an emphasis on imparting his knowledge of fine building techniques. It is in projects like this - bringing together the work of artisan tradespeople and the broader building trades - where the Special Projects team really stands out, and the success of the past eight years depended on the support of, and collaboration with, the Hall’s in-house teams and designers.

The team’s collaborative planning, flexibility and empathy for the demands of unique sites like the RAH are perhaps best reflected in the fact that years of complex works on a Victorian building caused no adverse structural effects and drew not a single complaint either from neighbours or the local authority. The team is looking forward with optimism to the next stages in the delivery of the Hall’s master plan from 2022 onwards, including an extension to the basement delivered in Phase 3, knowing that the first four phases were a job thoroughly well done.