The construction of the Gradel Quadrangles development for New College in Oxford has reached a key milestone.

The construction of the Gradel Quadrangles development for New College in Oxford celebrated a significant milestone with a traditional topping out ceremony on 1st July. 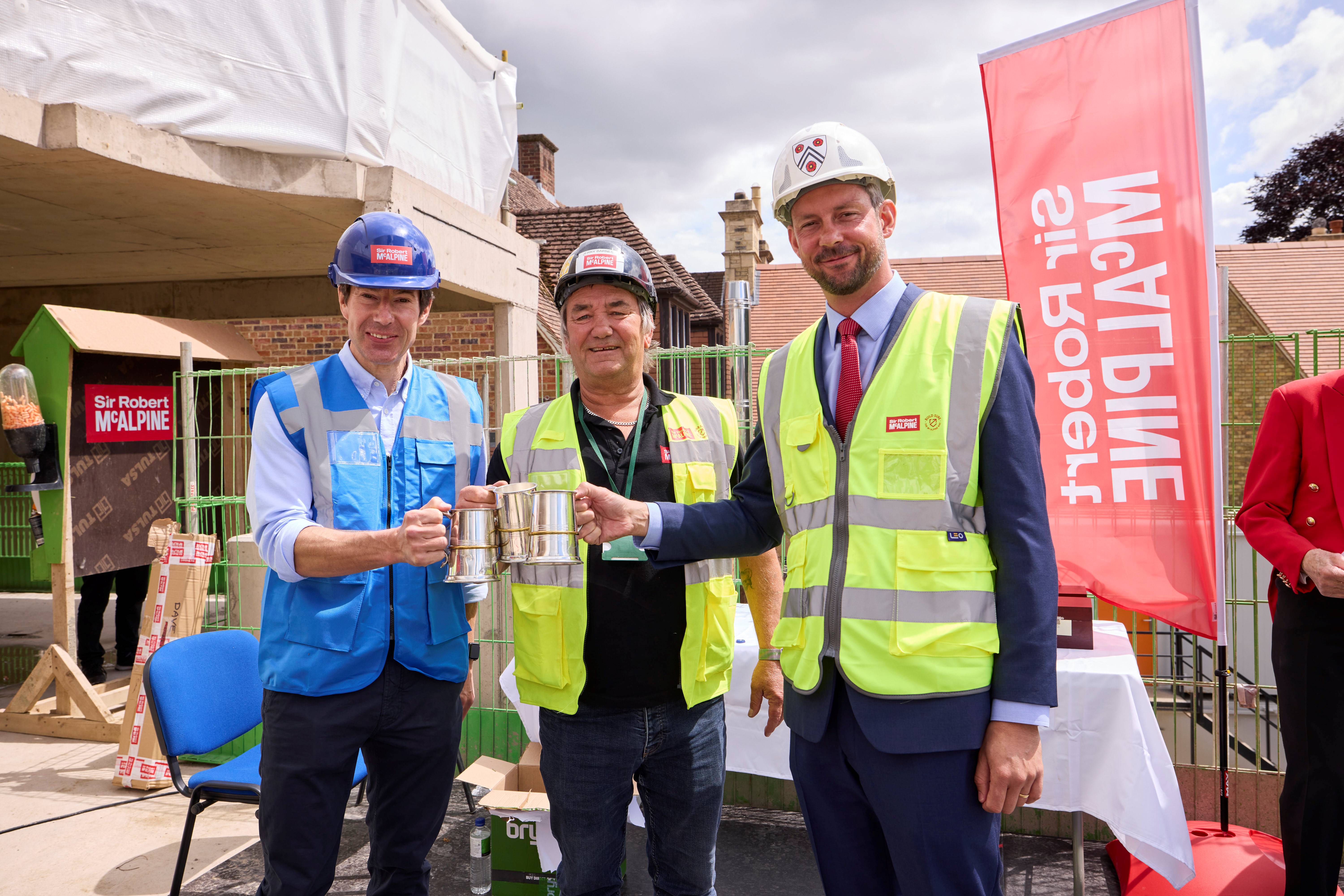 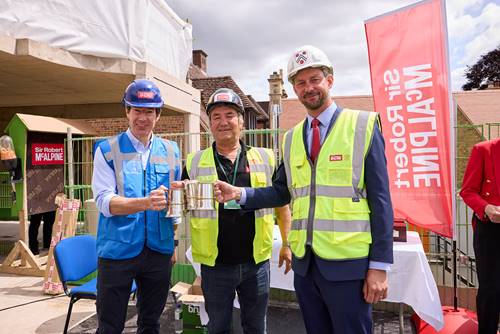 In keeping with our Scottish roots, a piper led the guests to the rooftop level of the building, where the traditional pouring of concrete took place and an evergreen bough was nailed to the structure, a custom which dates back to Roman times in order to protect buildings from evil spirits. This was followed by an exchange of the ceremonial tankard “for a job well done.”

The scheme comprises a three-storey quadrangle of student accommodation, new school buildings, porter’s lodge and landmark 21.5 metre tower. Its flowing, freeform design suggests a contemporary reimagining of the classic quadrangle model. It also features a complex limestone and sandstone façade, with each stone curved on both faces.

In support of New College’s commitment to achieving Net Zero Carbon by 2035, the project team sought to deliver savings in embodied and whole life carbon across the board. As a result, the project has been recognised by the ICE (Institution of Civil Engineers) Carbon Champion programme.

This topping out ceremony is a perfect opportunity to recognise and celebrate the success of the whole project team. Their exemplar collaboration on this complex scheme has enabled to deliver technical excellence and industry leading sustainability measures. We look forward to continuing our relationship with New College and delivering this state-of-the-art higher education facility for the students of Oxford.

“The Gradel Quadrangles at New College represent the latest chapter in our 643 year story. Enabled by the generous funding of Chris Gradel and many other donors, we will now be able to house all our undergraduates for their time with us, removing pressure on Oxford’s housing supply.

“At the Topping Out we can already sense that these new buildings will be an exciting addition to Oxford’s townscape. We are thrilled with the progress made by Sir Robert McAlpine in bringing it to life.”

“A recent Considerate Contractors Report noted that “The overriding impression is of a highly professionally organised site, with great attention paid to detail”. As a regular visitor to site, I endorse this independent assessment. To date the project team has excelled, not just in terms of construction but also with the other key metrics of safety, sustainability and community relations. I offer my personal thanks to Ian Cheung, to Dave Scott and to all the project team for reaching this key milestone of the project in such a successful manner. The key challenge for the project team as a whole, including me, is to maintain this high benchmark until completion in September next year.”

Guests gather to attend the topping out ceremony.

Bagpipes on the roof

In keeping with Sir Robert McAlpine's Scottish roots, a piper led the guests to the rooftop of the building.

Chris Gradel undertakes the traditional pouring of concrete to finish the roof.

From left to right: Chris Gradel, Jerry Barnes, and Gez Wells exchange the ceremonial tankard "for a job well done"