Work family pulling together through Covid

We’re proud of how our people have come together to support each other during the Covid pandemic this year.

As we enter the festive season, this year more than ever we’ve all got an extra reason to be grateful for family.

If the trials and tribulations of 2020 have taught us anything, it’s how important it is to have a strong support network around us, to get us through both the best and worst of times. As the saying goes, bad times really do bring out the best in people. As a business that’s all about strong family values, we’re proud of how our staff have come together to support each other throughout the turbulent events of this year.

The kindness, compassion, and amazing sense of team-spirit they have shown one and other has gone to demonstrate just how unbreakable the McAlpine family ties really are.

Here, we talk to three members of our team about their experiences during the pandemic and how the Sir Robert McAlpine family helped support them through.

‘SRM showed me that family is more than blood’

It’s all of our Covid-19 nightmares come true. Someone you love contracts the virus and ends up being rushed into intensive care, sedated and hooked up onto a ventilator.

Worse still, not long into his hospital stay, Joanna was called in by Chris’s medical team to be given the shattering news that his chances of survival were slim. The shock and pain Joanna’s family went through was near unthinkable. But thankfully, there was light at the end of the tunnel, as after 52 traumatic and seemingly-endless days in intensive care, Chris was eventually discharged and allowed to continue his long journey to recovery at home, surrounded by the love and care of his family.

Not having direct family members in the UK to lean on at such a traumatic time, Joanna’s colleagues stepped up to fill the gap, acting as a second family for her and her children during the ordeal; a real pillar of strength when she needed it most. She was absolutely stunned by the sheer volume of warm words, not just from her close project team but from people she hadn’t worked with for over a decade, or in some cases, had never even met.

People showed their support in many different, but equally wonderfully ways. Some texted her every day, while others would bring her family meals or check in regularly via text so as not to overwhelm her. Each small act of kindness was invaluable.

One particular colleague called her each and every day to make sure she was still doing what she needed to do to keep herself going, whether that was eating or getting enough sleep. His constant support extended beyond Joanna to both her children her colleague showing enormous compassion and helping them to cope with the understandably overwhelming emotions they were experiencing both in their own way and at their own pace.

Sadly, for Chris, this traumatic chapter is far from over, as he continues to grapple with the after-effects of the virus and gradually comes to terms with the full extent of the damage it has wrought on his body. But whatever lies ahead, the Sir Robert McAlpine family will continue to support both Joanna and the wider Kuzelewska family to help Chris on his long journey to recovery.

As Joanna beautifully put it, “when life became tough, Sir Robert McAlpine showed me that family is more than blood”.

The compassion and support she received during this time will stay with her forever, and she thanks everyone from the very bottom of her heart for all they have done and continue to do for her family. 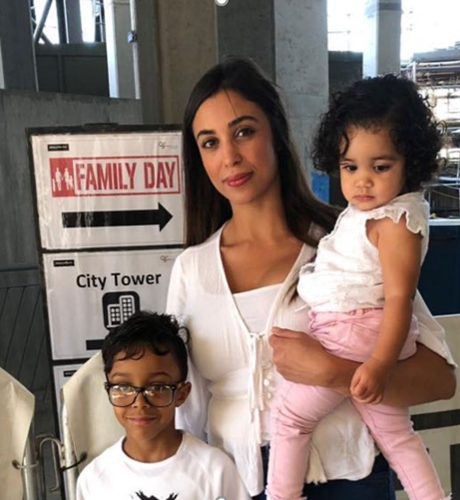 Eve Bader was only 10 days into her new role as an Information Systems Co-ordinator when the full force of the Covid-19 outbreak hit and we advised those who could to work from home. Being a new starter, she naturally had real concerns over potential redundancy.

But after a few weeks of working from home, she fast realised she had little to worry about.  Her project director, Bob Kay, put her mind at total ease, warmly and helpfully continuing her introduction to both the role and the wider team remotely. Though naturally she was inclined to assume that getting to know colleagues outside of the office would be more difficult. Eve soon found that frequent group meetings and phone check-ins actually allowed her to forge stronger connections with co-workers, as the unique circumstances of the pandemic fostered a real sense of collaboration and solidarity within the team.

Covid has been enormously difficult for families in so many ways, but despite this, Eve believes we can also take some real positives from this year when it comes to our new outlook on flexible working. After all, 2020 has proven just how productive many of us can be when working from home. Our flex working options meant she could do her work whenever suited her best, and crucially, at the times she felt she could be most productive.
Eve attributes much of her team’s success this year, in particular the online project dashboards they developed, to being able to work more productively at home, allowing her to achieve career-defining milestones that perhaps might not have been possible in an office setting.

For Eve, it’s allowed her to make strides in both her professional and personal life, as being able to choose when and where she works and cutting out the commute has given her invaluable extra hours to spend with her children. Prior to the outbreak, the traditional 8-5 working day had only left her with a couple of hours a day to see them, so the unexpected gift of being able to watch her two-year-old daughter and seven-year-old son progress and develop over the course of 2020 has been a real blessing. Eve believes it really has been a win-win scenario, and her hope is that flexible working options are here to stay beyond the pandemic.

Prior to the Covid-19 outbreak, Andy Rae had always been someone who simply “didn’t do ill” – he could count on one hand the number of times he’d been in to see his GP, and had always – to the point of self-confessed stubbornness – struggled on through whenever he felt slightly under the weather.

But Building Service Manager Andy’s experience with Covid-19 was a different beast entirely. When he started to feel under the weather it didn’t even occur to Andy that he might have the virus and he ploughed on as best he could just like he’d always done before. But close colleagues fast realised something wasn’t quite right when their resident jokester and happy-go-lucky team member started to become quiet and withdrawn.
It wasn’t long before Andy, struggling for breath and so weak he was struggling to drink water even with the aid of a straw, found himself in an ambulance on the way to hospital to be treated for Covid-19.

Thankfully, once admitted, his condition improved rapidly, and after spending four days hooked up to an oxygen machine at West Middlesex Hospital, he was given the all-clear to continue his recovery at home. A real team player, Andy was determined to get back to work as soon as he could, and took some persuading by us that this should be his last priority and that all his efforts needed to be channelled into rest and recovery. Desperate to at least stay in the loop, once clear of the virus, Andy would frequently choose to pop into meetings during his recovery period, just to get up to speed on project progress. Being back with his colleagues and in a positive and stimulating work environment helped him to take his mind off things after what had been an understandably challenging month.

The experience made Andy realise that there is more to life than just work, and the support he received from colleagues, in particular Anthony Trainor and Chris Morgan, really brought home to him how teams are more than merely co-workers – they are an invaluable support network. Even clients outside of his internal team reached out to him to wish him well in his recovery – testament to the positive impact he has had, and continues to have, on all those Andy works with.