International Men's Day is an opportunity to celebrate some of the inspirational men in our lives. In that regard, you'd be hard pressed to find a better example than Mark Straker, whose perseverance and strength of character are really something else.

Health, Safety and Welfare Manager, Mark Straker has suffered with a stammer since he was four years old.

Despite trying various types of speec 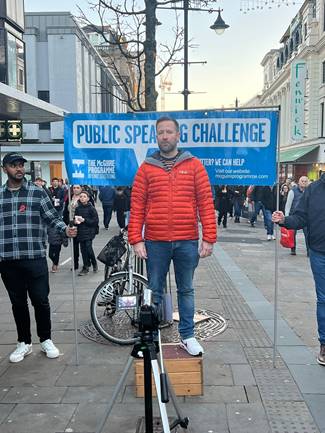 h therapy as a child, Mark continued to experience difficulties, often struggling to say his own name without long pauses and freezing mid-sentence.

Having established himself as a construction professional, as his career developed, Mark knew he needed help to face his fears when it came to speaking in front of people.

That’s when he came across the McGuire Programme, which has been a life-changer for Mark. The programme is made up of people who also stutter and help others to move beyond the fear and speak with control.

Through online and in person intensive training, this incredible community, has taught Mark how to be in control of his speech and master the physical and psychological tools needed to speak with eloquence, which is the main goal and aim of the programme. Ultimately the community works to help stutterers become more articulate than fluent speakers.

Fast forward four years, and Mark is now eager to go out and seek opportunities for public speaking, something which he really enjoys and takes great sense of pride and satisfaction in!

When he first started the McGuire Programme, back in February 2018, Mark was struggling through his words and kept trying to finish sentences, despite long pauses.

At the end of this first 4-day course in Newcastle, Mark took on the challenge of making a soap box speech in the middle of Northumberland Street.

Only three months later, following his refresher course in Wembley, Mark took on his next public speaking challenge.

As he developed new techniques and spoke more in public situations to raise awareness of stammering, Mark’s confidence grew. He has even spoken in front of 400 pupils and teachers at a school assembly.

He now proudly wears a stammering belt across his chest, which helps control breathing, a technique he has learned through the programme. He also ensures he keeps up to date with his training through intensive courses each year.

Mark is now a certified primary coach on the programme and helps other graduates in their speech journey as well as his own.

You can find out more via the McGuire Programme website >>

A big thank you to Sir Robert McAlpine for their continued support which has allowed me to carry on the intensive courses now they are back after the pandemic. It's truly a life changing programme which has given me the newfound confidence to be back out there again seeking public speaking opportunities.